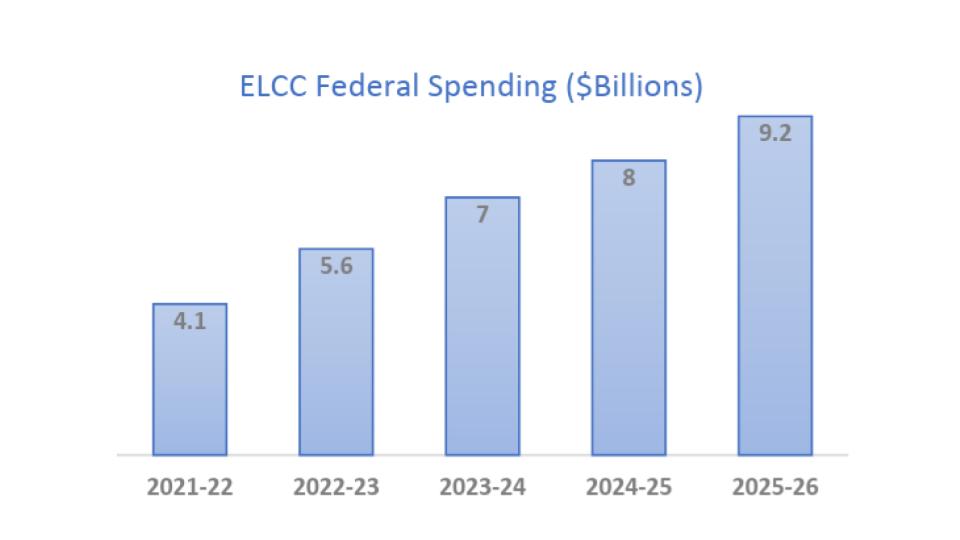 The child care movement has long advocated for a universal publicly funded and managed child care system We have called on the federal government to use its spending power and legislative authority to ensure that all children, regardless of where they live in Canada, have access to regulated, affordable, inclusive, culturally safe, flexible, high quality early learning and child care (ELCC) from birth to age 12.

We have called on the federal government to provide equitable funding and support for Indigenous Peoples, their governments, and communities to develop their own distinctions-based systems of ELCC programs and services to meet their needs in the way they decide.

The 2021 federal budget announced the federal government’s decision to act, using its spending power to convince the provinces and territories to collaborate on building a Canada-wide, community-based system of quality child care. It will be “a transformative project on a scale with the work of previous generations of Canadians who built a public school system and public health care.”  The federal government will ensure that families in Canada would “no longer be burdened by high child care costs—with the goal of bringing fees for regulated child care down to $10 per day on average within the next five years,” and by 50 per cent on average by the end of 2022. 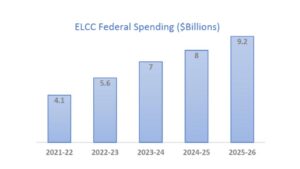 The federal government will transfer to the provinces and territories $27.2 billion over five years starting in 2021-22. These funds are in addition to $7.5 billion in federal ELCC support allocated in the 2017 federal budget, one-time spending of $420 million on workforce initiatives in 2021-22, and $2.5 billion in new federal funding for Indigenous ELCC over the next five years.

Starting in 2021-22, the federal government’s annual ELCC spending will increase each year. Ongoing annual federal funding for both ELCC and Indigenous ELCC will be set at a minimum of $9.2 billion by 2025-2027.

The federal government says the $27.2 billion will be used to achieve a reduction in parent fees, properly value the work of early childhood educators, and support expansion of not-for-profit child care services. The federal government will transfer to each province/territory its share of new federal funds in accordance with negotiated federal-provincial/territorial bilateral agreements.

To achieve the child care movement’s shared goals for early learning and child care, the substantial federal funds must be used to drive transformational change in ELCC with regard to public responsibility for funding, management and delivery. Transformation is necessary to replace the current market provision model with a universal public system that will make high quality, affordable, inclusive, flexible, culturally safe, regulated early learning and child care accessible to all who want it, and that properly compensates those who work in the sector.

Child care advocates stress that construction of a Canada-wide system of ELCC must honour and respect the Indigenous Early Learning and Child Care Framework, which sees Indigenous “children and families supported by a comprehensive and coordinated system of ELCC policies, programs and services that are led by Indigenous peoples, rooted in Indigenous knowledges, cultures and languages, and supported by strong partnerships of holistic, accessible and flexible programming that is inclusive of the needs and aspirations of Indigenous children and families.” Further, any and all decisions federal, provincial and territorial governments take with respect to ELCC must honour and respect the United Nations Declaration on the Rights of Indigenous Peoples, the Calls to Action of the Truth and Reconciliation Commission of Canada, the Calls for Justice issued by the National Inquiry into Missing and Murdered Indigenous Women and Girls, and Jordan’s Principle.

Transformation of Canadian ELCC will require two broad overarching elements of system change in each province/territory:

(1) a shift in the way all regulated child care services are managed and funded,

(2) creation of expansion strategies to increase the supply of regulated services through non-profit and public child care service delivery.

While aspects of these two areas of system change can be addressed in more than one way, it is noteworthy that all universal high quality public systems of child care have a number of interrelated elements in common—elements that federal, provincial and territorial governments must include as they build the promised Canada-wide ELCC system.

In Canada there is substantial reliance on non-profit groups and entrepreneurs to maintain and develop regulated child care services by securing public or private capital funding for a facility, navigating the licensing process, setting up operations and maintaining them.  This dependence on private individual and groups for the provision of an essential service is inefficient and risky.

As an integral part of transforming child care in Canada, responsibility for planning and managing the supply of regulated ELCC should be assumed by provincial/territorial governments, which may choose to delegate it to other public authorities such as municipalities.

Planning and managing the supply includes but is not limited to deciding the type and location of services according to public policy, community need, and public interest and ensuring that they are developed; setting parent fees and staff compensation in accordance with provincial/territorial requirements; carrying out regular public consultations; carrying out regular system evaluations and making results public; collecting data and conducting research and using results to make ongoing system enhancements and improvements.

In most of Canada, public funding for regulated ELCC is now provided through a patchwork of government grants that fall far short of what is needed to cover the costs of high-quality programs, forcing service providers to rely on parent fees to cover their operational costs. This means that program costs including compensation of early childhood educators – which can represent 80% to 90% of a non-profit centre budget – are borne by parent fees.  As a result, high parent fees are the norm, restricting access for many families, particularly those who are low income or have more than one child. While archaic and stigmatizing fee subsidy systems are still in place in almost all provinces and territories, they fail to ensure access to the low-income families for whom they are designed.

To achieve the federal government’s budget goal of building a high quality ELCC system with systemic reductions in parent fees, child care operations must be funded according to a formula that factors in proper and fair compensation for staff, other operational costs, and affordable parent fees set by the province/territory. The provincial/territorial parent fee must be aligned with the federal goal of a 50 per cent reduction on average by the end of 2022, and $10 a day by 2025-26.

All existing licensed ELCC operators, whether public, not-for-profit, or for-profit, should be invited to be part of the new publicly funded and managed Canada-wide system of ELCC.

However, all operators that accept to be part of the public ELCC system must also accept that they need to be publicly accountable for how public funds are used, and must agree to operate in a way that moves Canada towards the stated goals of high quality, affordability, accessibility, flexibility, and inclusive early learning and child care.

The conditions for receiving public funds must include the following:

In every jurisdiction in Canada there is an urgent need to increase the supply of licensed ELCC to meet current demand, which will rise further when parent fees are lowered. Provinces/

territories must be required to assume responsibility for planning, managing, and funding expansion of the system. Only public expansion strategies will put an end to the mismatch between service supply and demand that has contributed to shortages of services (“child care deserts”) and inequitable access. These are pervasive in Canada because individuals or private groups may be unavailable to develop services or because service providers are unable to break even or – in the case of for-profit providers – make sufficient profits.

Development of a multifaceted expansion plan must be required as part of the action plan of each province/territory. These will vary according to the jurisdiction’s situation, but each must include:

6 – No expansion of for-profit ELCC

The significant new child care funding possibilities in 2021 have made Canada a magnet for the attention of child care investment firms, posing potential dangers to the goals set out in the federal budget. If Canada’s aim is to build a publicly funded and managed, accessible, affordable, high quality and equitable early learning and child care system, expanding for-profit services is demonstrably a wrong direction. Thus, any further development of early learning and child care services must be public and non-profit only. In this way, the federal budget’s goal of a primarily not-for-profit publicly funded system of ELCC can be realized.

A well-qualified ELCC workforce is central to a high-quality ELCC system; without it, services will not be high quality and expansion will be hampered. The problems of recruitment and retention of a qualified ELCC workforce is complex; these can be resolved only by tackling layered but interrelated factors. These factors are closely linked to how ELCC services are funded, and whether public funding is sufficient.

As already stated, compensation for those who work in ELCC must be paid from public funds according to a provincially/territorially established salary grid that ensures decent, competitive wages and benefits, and incentivizes further education and professional development.

Governments must also act to address other factors that impede the recruitment of early childhood educators, and particularly their retention. These include:

Building a quality system of ELCC is an ongoing project that requires ongoing quality and system corrections and improvements based on experience, evidence, and evaluation. Data collection, analysis, development of indicators and research to provide answers to multiple questions about child care provision, use and governance, impacts on families, children women, the society and economy at both national and sub-national levels—and the sharing of data, analysis and research—are fundamental to system building.

Similarly, a quality ELCC system—especially one built through the significant expenditure of public funds—demands effective public accountability. Governments must develop and publish annual and multi-year ELCC plans, monitor and report publicly on their progress, and update plans based on lessons learned and the evolving ELCC needs and context.

From parent advisory groups to citizen engagement processes at all levels of government, democratic participation should inform and support the implementation of a quality ELCC system. A broad range of citizens who care about child care must be involved, including children and parents, educators, employers, advocates, researchers and academics.

All aspects of ELCC engagement processes – from design to delivery and follow-up – should be informed by a diversity of stakeholders whose views are respectfully considered. Governments must provide stakeholders with clear, relevant information in advance about the scope of the engagement process (e.g., limitations or constraints, range of interests and choices to be considered) and how their input will be used to shape government decisions.

ELCC primarily affects parents with young children and educators, yet they are the least likely to have the time and/or resources to inform the system’s development. Governments must provide resources and infrastructure to support and value their participation, according to their needs and areas of involvement. For example, the ELCC program funding formula could include funds to support quarterly family programs (with paid time for staff) to share information about the evolving system and opportunities for input.

While volunteers will always play an important role in the movement, relying on women’s unpaid/underpaid labour is a barrier to participation. Their time, energy and expertise should be resourced with core, long-term, organizational public funding support that prioritizes the inclusion of diverse voices and multiple perspectives and experiences in the child care advocacy movement.